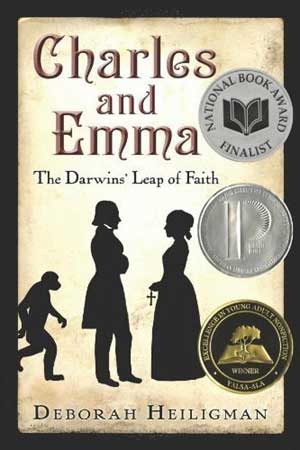 My research
My timeline

CHARLES AND EMMA: In 33 chapters and an epilogue I tell the story, letting it unfold so the reader can see how Darwin’s marriage played a huge part in his scientific work. He had a close and devoted relationship with Emma, and she adored him. But Emma was religious, and Charles Darwin was working on a theory that would rock the religious and social world. It pained Emma to think that she and Charles might not be together for eternity. The Darwins’ marriage, and how they coped with this gulf between them, even in the face of heartbreaking tragedy, is a real and poignant love story. For me, writing this book was a labor of love. I hope you enjoy it. Have fun exploring my CHARLES AND EMMA pages.

The Darwins’ marriage of science and religion – an article I wrote for the Los Angeles Times.

"This rewarding biography of Charles Darwin investigates his marriage to his cousin Emma Wedgwood…Embracing the paradoxes in her subjects’ personalities, the author unfolds a sympathetic and illuminating account, bolstered by quotations from their personal writings as well as significant research into the historical context."—Publishers Weekly (starred review)

"In 1838 Charles Darwin, then almost thirty, drew a line down the middle of a paper and listed the reasons for marrying on one side and the reasons for not marrying on the other. After much consideration, he opted for the former, and from his prospects he wisely chose his cousin, Emma, who was open-minded but devoutly religious. She supported her husband, even editing his work, but she feared for his eternal welfare should he follow his revolutionary theories to their logical end. Charles, in turn, was equally tortured, wanting to please his wife, wanting to believe in religion, but not at the expense of science. With great empathy and humor, Heiligman’s lively narrative examines the life and legacy of Darwin through the unique lens of his domestic life, an inspired choice that helps us understand that for all the impact his theory would have on the world, nowhere did its consequences resonate so loudly as within the walls of his own home. Here is a timely, relevant book that works on several levels: as a history of science, as a biography, and, last but not least, as a romance. A bibliography, an index, and notes are appended."—Horn Book Magazine (starred review)

"Beginning with Darwin’s notorious chart listing reasons to wed and not to wed, Heiligman has created a unique, flowing, and meticulously researched picture of the controversial scientist and the effect of his marriage on his life and work. Using the couple’s letters, diaries, and notebooks as well as documents and memoirs of their relatives, friends, and critics, the author lets her subjects speak for themselves while rounding out the story of their relationship with information about their time and place. She shows how Darwin’s love for his intelligent, steadfast, and deeply religious cousin was an important factor in his scientific work-pushing him to document his theory of natural selection for decades before publishing it with great trepidation. Just as the pair embodied a marriage of science and religion, this book weaves together the chronicle of the development of a major scientific theory with a story of true love. Published for young adults, this title will be equally interesting to adults drawn to revisit Darwin on his 200th birthday."—School Library Journal (starred review)

"When the book opens, Charles Darwin is trying to make a decision, and he is doing so in time-honored fashion: drawing a line down a piece of paper and putting the pros of marriage on one side and the cons on the other. As much as Darwin is interested in wedded life, he is afraid that family life will take him away from the revolutionary work he is doing on the evolution of species. However, the pluses triumph, and he finds the perfect mate in his first-cousin Emma, who becomes his comforter, editor, mother of his 10 children-and sparring partner. Although highly congenial, Charles and Emma were on opposite sides when it came to the role of God in creation. Heiligman uses the Darwin family letters and papers to craft a full-bodied look at the personal influences that shaped Charles’ life as he worked mightily to shape his theories. This intersection between religion and science is where the book shines, but it is also an excellent portrait of what life was like during the Victorian era, a time when illness and death were ever present, and, in a way, a real-time example of the survival of the fittest. Occasionally hard to follow, in part because of the many characters (the family tree helps), this is well sourced and mostly fascinating, and may attract a wider audience than those interested in science. Austen fans will find a romance to like here, too. To be illustrated with photographs."—Booklist (starred review)

"It’s common knowledge that Charles Darwin’s publication of On the Origin of Species unleashed a tidal wave of controversy; less frequently discussed, at least in children’s literature, is how this tension played out in Darwin’s own household with his wife, Emma, a woman of faith. Heiligman crafts her biography around this pivotal issue, which is never reduced to a simple Charles vs. Emma showdown, but instead is a delicate and ongoing conversation between two people deeply and unflaggingly in love. Heiligman begins with Charles’s vacillating views on matrimony upon his return from the famous Beagle voyage and his subsequent decision to marry his first cousin, Emma Wedgwood. It was a happy choice for both, with Emma finding in Charles a devoted husband and father, and Charles finding in Emma an intelligent companion, much-needed nurse, a faithful lover, a support in family crises, and most importantly for his work, a supportive yet devout critic of his work. Although Emma was ever anxious about the welfare of her increasingly agnostic husband’s soul, she was able to see the brilliance and importance of his theory and to reconcile in her own mind the mechanism of evolution and the hand of a divine Creator. Charles, on the other hand, could anticipate objections from Scripture adherents and sought his wife’s critique of his early drafts, rightly assuming that if he could persuade Emma on a particular point, he stood a better chance of persuading others
as well. Heiligman works in the background of their respective premarital lives and covers all the requisite information about Charles Darwin’s career, but the domestic lens through which she studies the story both humanizes the main players and tacitly suggests to thoughtful readers how the theory of evolution is still variously embraced, reconciled, or resisted today by those of primarily religious or scientific dispositions. A family lineage chart, bibliography, and index are included, and all quotations are cited. Come for the science, stay for the love story."—The Bulletin of the Center for Children’s Books (starred review)

More Reviews
"This rich, insightful portrait of Charles and Emma Darwin’s marriage explores a dimension of the naturalist’s life that has heretofore been largely ignored…The narrative conveys a vivid sense of what life was like in Victorian England… readers…will discover two brilliant thinkers whose marital dialectic will provide rich fodder for discussions of science and faith."—Kirkus

"…provides a unique blend of romance, scientific observations, explanations of medical practices prevalent in the early nineteenth century, and opportunities to examine scientific discoveries and religious beliefs in detail."—VOYA

"Heiligman’s writing is so good—so rooted in particulars of time, place and Darwin’s scientific thought, yet so light and full of drama—that readers will care about Charles and Emma and their love story. The debate between science and religion continues,today, but the relationship of Charles and Emma Darwin demonstrates that science and religion are not incompatible."—Children’s Book Page

Excerpt from a review of the audiobook, produced by Listening Library:
"Deborah Heiligman’s book (Holt, 2009) is not your typical heavy-handed biography of Darwin’s controversial legacy. Rather, it is a fascinating journey that features excerpts from the couple’s diaries, letters, and notebooks as well as the writings of friends, relatives, and critics. It is also the story of Darwin’s love of science and his love for his wife. Heiligman brilliantly explores the relationships that influenced Darwin—from his father who encouraged free thinking to his wife’s strict religious pleas. Narrator Rosalyn Landor’s crisp British accent and polished reading complements the author’s fabulous biography. A must-have to celebrate Darwin’s 200th birthday."—School Library Journal, starred review

Books Are My Thing

Through the Looking Glass


Watch a book trailer made by Rachel Young, a student at Texas Woman’s University: