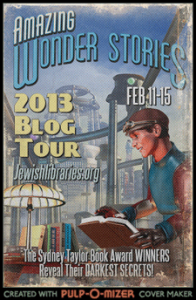 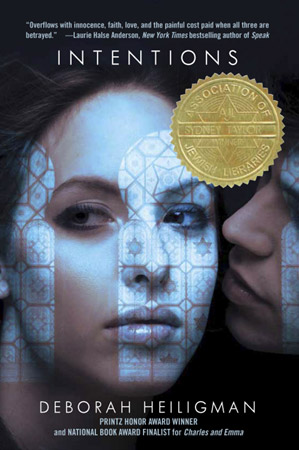 Visit Knopf’s Intentions page
Here’s my playlist for the book.

The Sydney Taylor Book Award Winner for Teen Readers from the Association of Jewish Libraries!

Rachel thought she was grown up enough to accept that no one is perfect. Her parents argue, her grandmother has been acting strangely, and her best friend doesn’t want to talk to her. But none of that could have prepared her for what she overheard in her synagogue’s sanctuary.

Now Rachel’s trust in the people she loves is shattered, and her newfound cynicism leads to reckless rebellion. Her friends and family hardly recognize her, and worse, she can hardly recognize herself. But how can the adults in her life lecture her about acting with kavanah, intention, when they are constantly making such horribly wrong decisions themselves? This is a witty, honest account of navigating the daunting line between losing innocence and entering adulthood—all while figuring out who you really want to be.

“The fast moving, powerful narrative in Rachel’s present-tense voice will easily draw teens, not only with its dark drama, but also with the spot-on teen banter and wry viewpoint.”—Booklist, starred review

“This witty but unsettling coming-of-age story from National Book Award–finalist Heiligman (Charles and Emma) traces 15-year-old Rachel Greenberg’s fall from innocence after a series of betrayals leaves her angry and confused… Heiligman nails Rachel’s reeling emotions as she tries to restore her faith and find answers and redemption.”—Publishers Weekly

“Intentions follows in the tradition of classic coming-of-age novels such as Judy Blume’s Forever…Although Judaism is front and center in “Intentions,” which draws its title from the rabbi’s instructions to pray with kavanah, or intention — the particular details of Judaism are secondary. At the core of the story are questions that all teenagers grapple with: faith in goodness and justice; faith in friends and in family; and, most importantly, faith in oneself.” –Jewish Daily Forward. Read more: http://forward.com/articles/160733/are-you-there-god-it-s-me-rachel/#ixzz23qI1TXaA

“Intentions is a unique and welcome addition to the world of young adult literature.”–Bookpage

“Heiligman’s ear for teen dialogue and situational humor is particularly keen here, as Rachel goes from thinking she’s not stoned to a declaration that “pot = truth serum.”—Kirkus

“Heiligman’s novel will be a page-turning read for young adults. It is also one of those cross-over titles that will appeal to adult readers as well. It’s somewhat rare to discover an excellent young adult novel with a specifically Jewish theme. “Intentions” is that book.”–Kansas City Chronicle

Here is an interview with me about the book.

And here is a piece I wrote about memoir in fiction.

Trailer made by Kristina Budelis. Original song, “Crashing,” composed and sung by Benjamin Weiner. Rachel is played by Lauren Glover.