Biography for media use 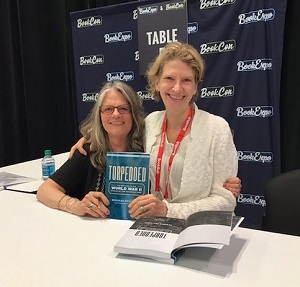 My editor Laura Godwin and me at Book Expo 2019.

Deborah Heiligman is the author of 32 books, most of them nonfiction. Her latest, Torpedoed: The True Story of the World War II Sinking of “The Children’s Ship” (October, 2019, garnered four starred reviews, won the SCBWI Golden Kite Award and is a finalist for the YALSA Excellence in Nonfiction Award. VINCENT AND THEO: THE VAN GOGH BROTHERS (2017), won the YALSA Excellence in Nonfiction Award, the Boston Globe-Horn Book Award for nonfiction, the SCBWI Golden Kite Award for nonfiction, and an ALA Printz Honor. CHARLES AND EMMA: THE DARWINS’ LEAP OF FAITH( 2009) won the inaugural YALSA Excellence in Nonfiction Award, was a Printz Honor and a National Book Award Finalist. The Boy Who Loved Math: The Improbable Life of Paul Erdos (2013) won the Cook Prize, the Anne Izard Storytelling Award, was a New York Times notable book, and is a perennial favorite in elementary schools, as is From Caterpillar to Butterfly (1996). For more information, please visit www.DeborahHeiligman.com.
↑