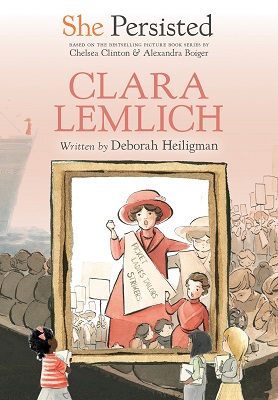 Inspired by the #1 New York Times bestseller She Persisted by Chelsea Clinton and Alexandra Boiger comes a chapter book biography series about women who stood up, spoke up and rose up against the odds–including Clara Lemlich!

Clara Lemlich immigrated to New York to escape danger in Ukraine, where she was born. She started working in clothing factories on the Lower East Side, only to realize that workers were being treated unfairly. So she stood up for the rights of workers, especially girls and women–and she won, changing the way factory workers were treated in America forever!

Reviews:
"The stories of two more fearless women have been added to the “She Persisted” series. Clara Lemlich and Margaret Chase Smith both demonstrated fierce independence from an early age. Lemlich grew up in the late 1800s in Ukraine where, because she was Jewish and female, she was denied schooling. She bartered with neighborhood peers to teach her to read Russian and smuggle books to her. At age 12, Smith realized the importance of getting a job to earn income so that she could have her own purchasing power. Both women dedicated their lives to advocating for others. Smith became the first female U.S. Senator in 1949, elected into office because of her strong record of listening to and acting on the needs of her constituents. Lemlich, who immigrated to the United States in her teens, rallied women to stand up for basic, humane working conditions in the American factories where they worked. The books feature six easy-to-read chapters that chronicle each woman’s life and accomplishments, followed by a chapter that makes suggestions for how readers can persist in a vein similar to the subject. The authors’ absorbing accounts, along with Boiger and Flint’s abundant illustrations in black and gray vividly bring the successes and struggles of each woman to life. VERDICT These titles are an important addition to the biography section of any library."—School Library Journal

"Heiligman’s entry in the She Persisted series follows Clara Lemlich from Gorodok–where she became a secret voracious reader–to New York in 1904. Clara finds work as a seamstress in a shirtwaist factory where conditions are oppressive. Her innate outspoken nature and sensitivity to injustice lead her to union organizing and eventually to rally tens of thousands of garment workers in a general strike. Heiligman’s six brief chapters emphasize Lemlich’s passionate ideals and zeal for social justice, using descriptions of “fire” and “burning” to describe Clara’s intensity. These words may remind some of the Triangle Shirtwaist Fire, which occurred two years after the strike (the Triangle Shirtwaist Company did not sign the contract that workers successfully negotiated). Heiligman describes Lemlich’s work organizing fellow housewives in opposing hikes in rent and the price of food while she raised her children and supporting Cesar Chavez while a nursing-home resident. She considers what lessons in persistence can be found in Lemlich’s long and committed life, offering perspectives from Lemlich’s grandchildren and sharing Clara’s charming personal affirmation (“I am beautiful. I am lover-ly”) along with eight ways to honor Lemlich’s voice. A noteworthy inclusion is the list of sources, including references to the author’s telephone interviews, formatted readably for the target audience. Intentionally and successfully inspiring."—Kirkus

About writing this book:
I had a wonderful time researching this book–and some great luck! As you know if you’re read other pages on my website, I research using mostly primary sources. That means journals, diaries, letters, and interviews. For this book I was lucky that Clara wrote some articles herself, and there were also interviews done with her when she was alive. But the most exciting find was—Clara’s relatives! I interviewed her daughter, six of her grandchildren and a great niece. This was during the Covid-19 pandemic, so we talked on the phone or a video call. Some of them I talked to many times. They each gave me details about Clara I wouldn’t have known otherwise. They told me about her as a real person, not just an icon. Then I found out that Joel, one of her grandsons, had interviewed Clara, Clara’s children, friends of Clara’s and fellow activists, more than forty years ago. He taped those interviews—but the tapes were in a library at Cornell University and because of the pandemic, the library was closed. I was so frustrated. When I mentioned this to Joel, he told me he thought maybe his cousin Jane had copies of the tapes. Indeed and she did! And as luck would have it, Jane lives only a few blocks away from me in New York City! So we met up, masks on, and she lent me the tapes.

Next I bought a tape player that plays cassette tapes (of course I had given way my old one.) The tapes were filled with great treasures; I learned so much more about Clara because of those interviews and was able to paint a more complete picture of her in this book.

Speaking of pictures…below is a photograph of Clara as a young woman. Since the book is illustrated (BEAUTIFULLY!), but there are no photographs, her grandson Joel thought you would like to see what she looked like around the time she was doing her first organizing work. You can see the photograph is so old it has a rip in it. When I was talking to her great niece, she told me a fun story about baking rugelach with Clara (whom she adored). The story made it into the book (p.38)—but we couldn’t fit the recipe. Here it is! Let me know if you make it and if you feel Clara’s spirit as you do!

Please let me know if you’ve read the book and what you think of Clara. And are you doing her facial exercises…? 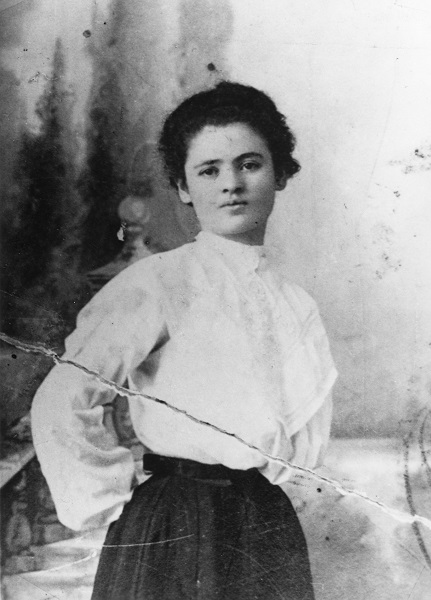 Meeting Clara’s Family
I interviewed Clara’s daughter Rita and six of her grandchildren and one great niece for the book. All on the phone or Zoom because of the pandemic. But in April I had brunch with Rita, who just turned 98, and her grandsons David and Joel and their wives, and her granddaughter Jane. Spouses were there, and one great grandson, Adam. Rita is amazing, and so is the whole family. They are all fighting for social justice just like Clara!

Jane, David, Rita holding the book!, Joel, me, and Adam.