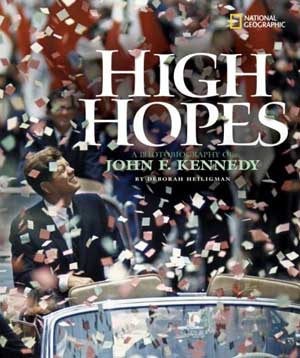 This profiles the 35th President of the United States, a man of enduring fascination. It is filled with great photographs, interesting new facts, and an inspirational forward by President Kennedy’s sister, Eunice Kennedy Shriver.

Here’s what Newsweek had to say about the book!

Book Sense featured High Hopes in their Autumn 2003 Top Ten JFK Picks. The list is based on the enthusiastic nominations of independent booksellers nationwide, and the list was compiled in association with The History Channel.

Check out this article I wrote for the Philadelphia Inquirer.

Read an article from the South Florida Sun-Sentinel about Kennedy and High Hopes.

Reviews
A glossy take on the life of the 35th president. The text, which begins with a foreword by Eunice Kennedy Shriver, is frankly admiring, and successfully captures the spirit that makes Kennedy an enduring figure in our history. Heiligman covers her subject’s life from his childhood to his assassination, including events from his administration such as the Bay of Pigs, the Cuban Missile Crisis, the establishment of the Peace Corps, and his 1962 order to send 30,000 Army and National Guard troops to the University of Mississippi campus…This well-designed book features large, well-chosen, black-and-white photographs; black, white, and silvery-gray type highlights important quotations from Kennedy’s speeches.”—School Library Journal